The Stranger things , stories line was start back to 1970s. Everything was started in a small town. When a young boy vanishes, a small town uncovers a mystery involving secret experiments, terrifying supernatural forces, and one strange little girl. A company which experiments something, in the end release something which should not be in earth. And because of a girl, things still under control.

in 2016, the stranger things had released in netflix. The story line was film act 1970s. As you can see actors outfit and fashion and everything was using 1970s stuff. So far there are come with Season 3. Each season come with 8 or 9 episode. The story line was good because it will make you nervours and feel like want to keep watching it

there are some character which you need to remember because they are the main story line. Finn Wolfhard act as Mike , Gaten Matarazzo act as Dustin, Caleb Mclaughlin acr as Lucas, & Noah Schnapp act as Will, these 4 kids are the gang which always play around. Next the hero goes with Millie Bobby brown act as Eleven. Well, because of Eleven , all the story began. 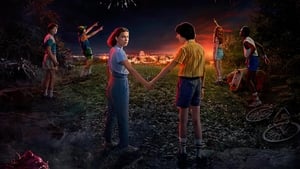